We have all heard the stories and may not have taken pause to consider where they come from because they are so commonplace in our society. They have made us dream, bred fear, and have taught us important lessons in life. Many stories such as these come from the ancient Greek myths and fables. What you may not know is some of the most preeminent stories come from the island of Crete.

While Greek civilization is well known, the nearby Minoan civilization that flourished on Crete less known, but deserves far more attention from curious travellers. If you look it up in a respected encyclopedia or give it a cursory online glance, you will learn that it is regarded as a Bronze Age culture that flowered between c.2700 to c. 1450 BC. Often, the credit for the name itself, “Minoan,” after the mythical King Minos, is given to the intrepid British archaeologist, Sir Arthur Evans. When he excavated at the Knossos palace in 1901, although he gave credit to the German scholar Karl Hoeck, who used the term in his two-volume history, Minoan Crete, in 1825. Those numbers are impressive and yet barely approaches the depth of influence on the modern imagination, which is hinted at by Will Durant in his massive study on history. Durant wrote that Minoan culture provides us with the first link in the chain of European civilization itself. Beyond the historical link is the artistic and mythological connection, which thrives to this day in the way the stories of Theseus, Ariadne, Daedalus, and the Labyrinth have been told and retold for centuries.

The legend of the Labyrinth was born from Crete mythology and still has the power to inspire fear in those who hear its story today. The legendary artificer, Daedalus built this elaborate and confusing structure for King Minos of Crete. Its purpose was to hold the feared and dangerous Minotaur. The Minotaur was a cursed beast bred from a bull and the wife of Minos as punishment for not sacrificing a gifted snow-white bull from the gods. The Minotaur fed on the flesh of humans and Minos had to sacrifice seven men and women from the city of Athens every year by releasing them into the Labyrinth.

It is said that Minos locked Daedalus and his son Icarus in a high tower so that he may never reveal the secrets of the Labyrinth. This, of course, bred another great Crete legend; Icarus, the boy who could fly.

While locked in the tower Daedalus fashioned two sets of wings so that he and his son, Icarus, may escape from the tower and leave Crete and King Minos behind them. These wings were made from feathers of passing birds and wax from candles. They were miraculous and Icarus was thrilled to be able to fly. Before they ascended into the sky Daedalus warned his son; if he flew too high the heat from the sun would melt the wax and if he flew too low the feathers would get wet with sea water. Icarus agreed but shortly after he was in the air he forgot his father’s warnings. The exhilaration of flying overcame him and he flew too high. The wax of his feathers quickly melted and he fell from the sky to his death. This legend is one that is often referred to in our time as a lesson about youthful carelessness and to head the advice of your elders.

One cannot talk about the legends of Crete without mentioning Zeus, God of Thunder. Zeus was born from Titans Cronus and Rhea. Cronus was a feared god that often killed and swallowed his children. Rhea protected Zeus and hid him away to be raised by the goats Amalthea and Melissa who were assisted by many soldiers and smaller gods to ensure that Cronus would not hear baby Zeus’s cries.

When Zeus was grown he sought out Titans Cronus to defeat him in the epic 10-year battle, The Titanomachy. Zeus defeated his father and after this great feat the Cyclops granted Zeus the power of Thunder. During the battle Zeus made Cronus release his siblings whom he had swallowed. Thus this is considered the birth of Hera, Demeter, Poseidon, Hestia, and Hades. His siblings declared Zeus their ruler and together they were called the Olympians.

The effects of these legends and many more have been seen in Crete art, literature, and culture throughout the ages. The beautiful frescoes of bull-jumpers, capering dolphins, enchanting goddesses, and beautiful saffron-gatherers have enchanted the world since English archaeologist, Arthur Evans first unearthed them in the late 1800s. The evidence of Minoan culture being matriarchal and relatively peaceful has inspired legions of writers to provide us with alternate views of history, mythology, and religion. Including Mary Renault, Marija Gimbutas, and Nanno Marinatos. In Nikos Kazantzakis’ book, Report to Greco, he writes about the magical allure of this ancient civilization:  “There is a kind of flame in Crete — let us call it soul — something more powerful than life or death. There is pride, obstinacy, valour, and together with these something else inexpressible and imponderable, something which makes you rejoice that you are a human being, and at the same time tremble.”

This April 9-18th we will be leading a sacred journey to the revered island of Crete. Join us as we visit the birthplace of these mystical legends such as the village of Kiparissi, the Minoan Palace of Knossos, and the Palace of Malia. See where these legends were born while you connect with the beauty and mysticism of this beautiful Greek island.  Visit our Journeys page to learn how you too could join us on this journey of history, mysticism, and legend. –  Phil Cousineau

Learn more about Mythic Crete with Phil Cousineau and Georgios Spiradakis: A Ten-Day Tour to the Legendary Island of Light here. 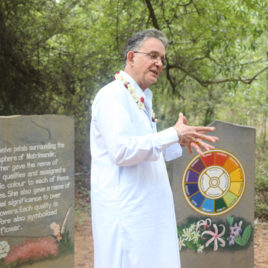