Read the final instalment by Lori Erickson about her journey to Mexico & Guatemala with Sacred Earth Journeys. Next time – a guest feature by Lori’s husband Bob!

If you’re a Star Wars fan, this image might look familiar. That’s because in Star Wars: Episode IV – A New Hope, the Guatemalan archaeological site of Tikal stood in for Yavin 4, a jungle-covered moon used by the Rebel Alliance.

Tikal marked the end of our Maya Temples of Transformation Tour with Sacred Earth Journeys (see also Exploring Sacred Mayan Sites; Mayan Mysteries of Palenque; A Ceremony Amid Mayan Ruins; and Finding the Holy in a Tradition Not My Own). In many ways, we saved the best for last.

In Mayan, Tikal means “in the lagoon,” but its alternative name is far more evocative: “the place of the spirit voices.” This city, which was built between 700 BC and 900 AD, was once home to more than 60,000 people, making it one of the largest cities in the Americas. Today more than 3,000 structures built by this civilization remain, though many are still covered by jungle.

The archaeological site is part of Tikal National Park, which protects 220 square miles of rainforest. More than 300 species of birds live here, along with jaguar, puma, several species of monkeys, tapirs, and more than 60 kinds of bats.

As I wandered through Tikal’s ceremonial plazas, temples, residences, and ruins, the sounds and smells of the jungle were ever present, from the deep grunting of howler monkeys in the trees high above to coatis (a raccoon-like animal) darting across the trails. The rich diversity of plant and animal life provided a counterpoint to the serenity of the ruins.

The heart of Tikal is its Grand Plaza, a ceremonial space bordered on the east and west by two extraordinary pyramid-temples. The Temple of the Great Jaguar (named after a carving above its main doorway) towers more than 150 feet above the plaza, its sides rising steeply to the sky. Across from it is the Temple of the Mask, a slightly smaller, but still impressive, structure. Its name is derived from a pair of masks carved into a wall on its top platform.

Standing between these two landmarks, I was reminded of the Great Pyramids in Egypt. Both the ancient Mayans and the ancient Egyptians loved to build big, and their creations still have the capacity to evoke awe in us.

I loved, too, walking the winding paths between the ruins and temples. Because of Tikal’s sprawling expanse, it’s easy to get away from other visitors. I spent an entire hour in a set of ruins without seeing another person, a gift that allowed me to soak up its sights, sounds, and atmosphere without interruption.

That time gave me the chance to reflect on what I’d learned on our Mayan tour. I thought back to a conversation I’d had with Helen Tomei, the owner of Sacred Earth Journeys. We were visiting about the power of pilgrimage to change people’s lives, and she told me that when she was a young woman ready to start traveling on her own, she spent a lot of time looking at maps. She would spread them across a table and look at one country after another, trying to decide where her heart was being pulled.

“It’s sort of a mysterious thing, this going on pilgrimage,” she said. “The whole world is open to you, and yet you need to find the individual place that calls to you. For me, the first place was India. I kept coming back to that country on the map, especially to its Himalayan region. And that’s where I ended up traveling, which in turn set in motion a lifetime of journeys.”

If you’re a believer in the power of pilgrimage, you probably have a similar story, a time when the door to the world, and to the spirit, opened wide. In my own life, the Native American holy site of Bear Butte in South Dakota was the entrance.

And I find it curious that the world’s sacred sites have so many similarities – not in their particulars, but in their essence. I know I experienced a similar feeling standing in the Grand Plaza of Tikal as I’ve felt in many holy places: it felt like coming home.

That said, the Mayan world still holds many mysteries for me. I was introduced to just a few Mayan sites on my trip to Mexico and Guatemala. But I learned enough to know that I want to go back to these remote landmarks filled with beauty and power. I want to hear the howler monkeys again, and to sit on the steps of a temple and imagine what it was like when it was a living place of worship.

Let me end with a story from our friend Brian, who traveled with us on our Mayan journey. When he came back to the bus at the end of our second day in Tikal, he told us about an experience he’d had earlier that afternoon.

“I was on top of one of the temples, not saying anything, just looking out over the scene,” he told us. “And there was a guy sitting a few yards away, saying nothing, just looking out at the landscape like I was. And when he got up to leave, he turned to me and said, ‘This is the best day of my entire life.’”

That interchange crystalizes for me one of the reasons why we go on pilgrimage, whether it’s to Tikal or Egypt or Bear Butte: we go because of those shining moments, the ones that we store in our treasure house of memories, the ones that give depth and meaning to our entire lives.

Here’s a little video I took on top of the Temple of the Masks at Tikal (the sounds in the background are howler monkeys): 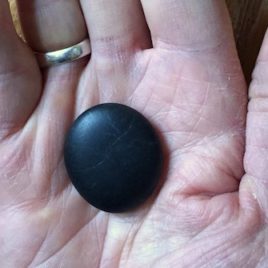 Previous Finding the Holy In a Tradition Not My Own 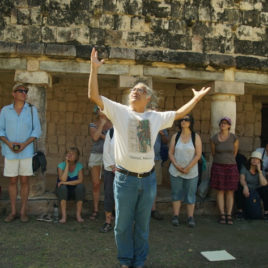 Next A Ceremony Amid Sun-Dappled Mayan Ruins