Welcome to Portals of Peru with Freddy Silva

Discover the power places of an ancient civilization November 5 - 14, 2017
Tweet

Join best-selling author & ancient mysteries researcher Freddy Silva on a quest to the lesser-known aspects of megalithic Peru, from Sacsayhuaman and Machu Picchu to the Uros Islands.

This is not your typical Andean trip. Unlike others, it reveals an aspect of pre-Inca culture few people get to see and hear. Such as the ritual towers of Sillustani; the underground resurrection chamber of Q'uenqo; the Egyptian roots of Sacsayhuaman; the Otherworld portal of Amaru Muru; and the ceremonial Moon temple Huayna Pichu. Highlights include meditations, mountain walks, dowsing, time for personal introspection, and lively discussions on the true origin of these awe-inspiring power places, all in a carefully-balanced itinerary. READ MORE 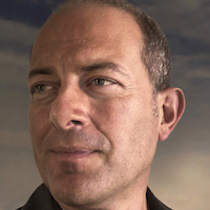 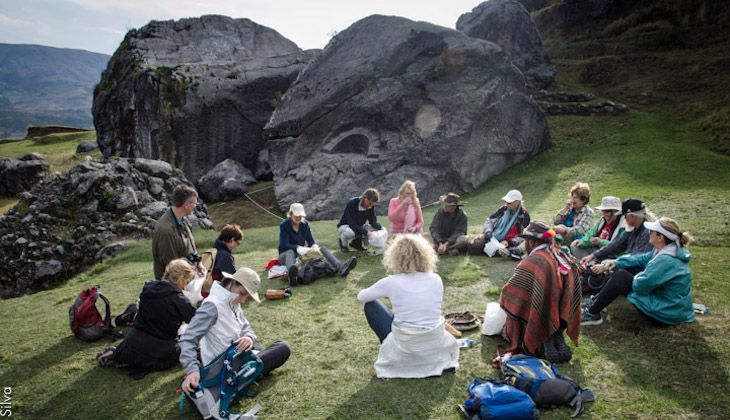 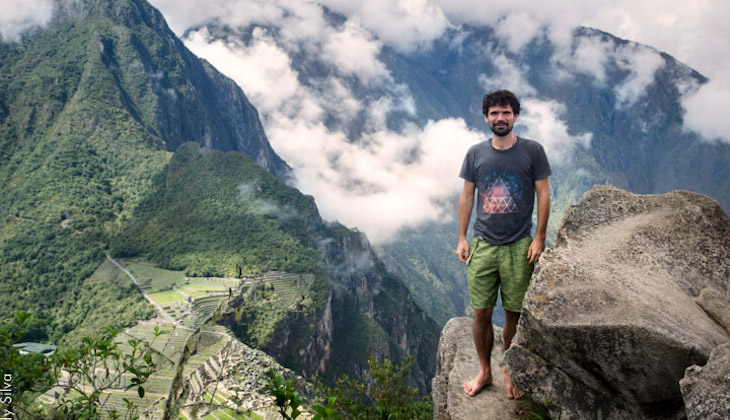 We had a wonderful time in Peru: Freddy is a total pro and very knowledgeable.Jeff Wilson, Tukwila, WA

This was my first trip to Peru and the country was everything I'd hoped for. Very nice to travel in a small group with like minded individuals.Beverly Westbrook, Houston, TX 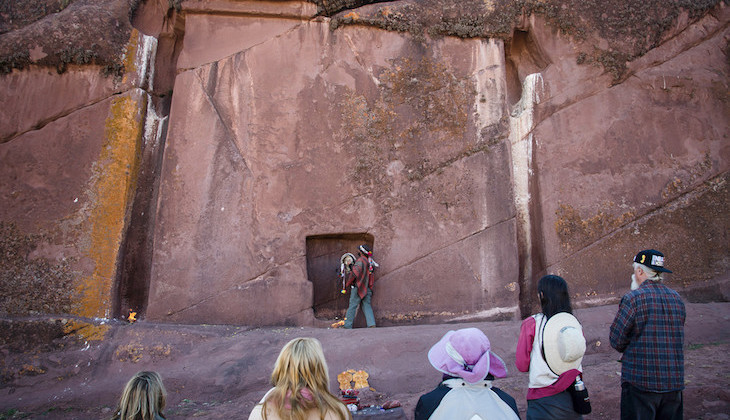 There are places on Earth that literally take your breath away. The megalithic culture of Peru is such a place. Sacred sites such as Sillustani, Sacsayhuaman and Macchu Pichu defy description because they defy human scale. Imagine cutting blocks of stone too large for modern cranes to lift, hauling them up near-vertical mountainsides and 40 miles across high altitude terrain, then fitting them with lathe-like precision so that thousands of years later the fruits of this labour are still fairly intact.

You get the idea.

It is known that the Inca did not build these sites but merely followed an ancient tradition already developed around Lake Titicaca c.15,000 BC, a time when vast sheets of ice were collapsing across the Earth, bringing unparalleled climate change and catastrophe. It was under such conditions that an advanced culture thrived in South America, the stuff of legends. The Inca maintained their memory so that one day we could travel to these temples and marvel at a civilization whose work modern science still has trouble explaining.

To visit such remote places is to connect with a culture the Andean people considered beyond time. Myths speak of travelling gods moving stones through the air to the command of sound, and erecting "mansions of the gods" literally overnight. What spiritual technology were they privy to? What motivated them to create such a megalithic landscape?

You can find out by joining us on a quest into the unbelievable.

We will go beyond the typical site visits and focus on details that few people get to see and hear: Huayna Pichu, a ceremonial Moon temple above Macchu Pichu; the underground chamber of Q'uenqo, once used for the ritual of living resurrection; the beehive tower of Sillustani; and Amaru Muru, a portal into the Otherworld.

We shall listen to legends, tap into subtle energies, practice some dowsing, and perform one or two guided meditations inside some chambers. And for ten days we shall feel like gods.

Welcome to the Portals of Peru.

Read our guest blog by Freddy Silva - he explores the true significance of some of Peru’s most iconic sacred sites, revealing that stone towers (chullpas) such as those at Sillustani and Cutimbo as well as portals such as Amaru Muru may have been part of a global tradition of secret initiation rituals. A must-read!

The Otherworld in the Andes - Part I

The Otherworld in the Andes - Part II

View a preview of Freddy's latest documentary here: Secrets of the Andean Temples

Watch more videos from Freddy Silva about Peru on our YouTube channel:

Peru - The Importance of Water, with Freddy Silva

You will be met on arrival at Cusco airport and transferred to the hotel. Our first day is spent doing... nothing strenuous. Cusco lies at 11,000ft and your body needs time to adapt. Drink tea, chew coca leaf and watch the local world come and go.

This evening we will enjoy a Welcome Dinner together with our fellow travellers and tour leader Freddy Silva. It's an opportunity to enjoy delicious local cuisine and get to know every pilgrim (or as Freddy calls them, Willing Infodels). We can also share our aspirations as we prepare to engage with the megalithic world.
(Overnight in Cusco at the Taypikala Cusco Hotel or similar) 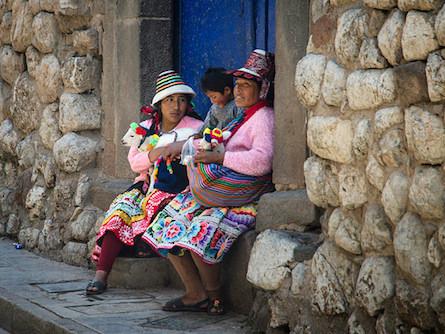 First matter of the day is a cleansing ceremony with Peruvian shaman, Willko Apaza, to purify the spirit body, because entering temples is best done without negative baggage. We then walk around the Inca Roca Palace to marvel at astonishing megalithic masonry, such as the 12-angle stone. On to Coricancha, the original navel of the earth, now inside Santo Domingo cathedral, site of the original megalithic temple dedicated to the Sun, Moon, Venus and Pleiades. It is also the first point of the Cusco Triangle identified by Freddy.

After lunch we take a short bus ride to Killarumliyoq, a hill site where Moon ceremonies were held — and where we can perform our own — to see a boulder carved with a mysterious semi-circular glyph, and a cave with petroglyphs.
(Overnight in Cusco at the Taypikala Cusco Hotel or similar) 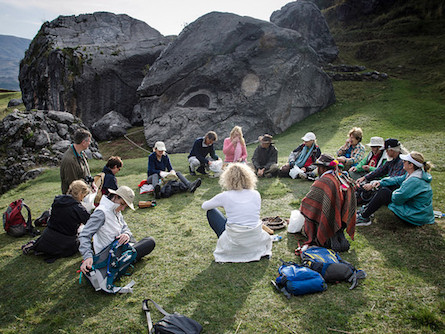 Today we start with a visit to Q'uenqo, a mysterious limestone butte carved with ledges, stairways, and a chamber used for performing living resurrection rituals to access the Otherworld. This is the second point of the triangle. Then, we enjoy an invigorating walk around Amaru Machay, a complex of carved niches and ceremonial areas, and two underground chambers illustrating the solar and lunar ideals.

After lunch, it’s a full afternoon at Sacsayhuamán, third point of the triangle and a sprawling megalithic complex overlooking Cusco. Along with ample time to walk around freely, we’ll look at lesser-known aspects such as its Egyptian connection, secret tunnels, an astronomical plain, and its original seven niche semi-circular court.
(Overnight in Cusco at the Taypikala Cusco Hotel or similar) 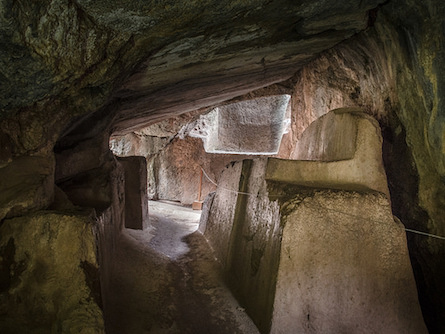 A short coach ride to Tombomachay, an important temple because it protects the sacred springs feeding the local sacred sites. A favourite resting place of the Incas, commonly referred to as the “Baños del Inca” or “Baños de la Ñusta“ (Baths of the Incas or Baths of the Princess). The site is ideal for connecting with water and known for its ability to memorize intent. We then continue on to the picturesque town of Pisac, with its colonial architecture and awe-inspiring scenic beauty, for lunch.

After lunch we ride up the mountain to Pisac Temple, high up on a spur overlooking the sacred Urumbamba river, for the sole purpose of trekking down the original steep pilgrim trail, to experience what it was like to be a pilgrim on the ancient trails. A perfect place to appreciate the scale and solitude of the Andes. So start exercising.
(Overnight in Pisac at the Royal Inka Pisac or similar; hot pool and sauna may be available) 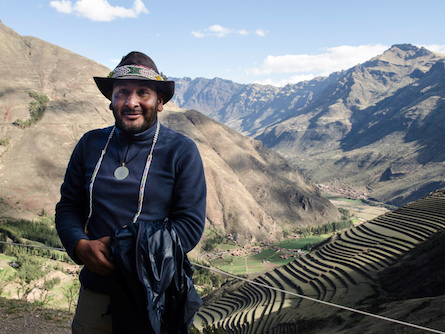 From Pisac we take a short drive, because we then have to climb a steep ravine. Ha! Ñaupa Iglesia is an extraordinary and seldom visited site. Why? It's a mystery: a doorway that goes nowhere carved out of solid bedrock with three altars that point to…well, that's the mystery and why we are going there. After a ceremony, we return along the sacred valley for lunch, and on to Ollantaytambo and its massive hillside terraces, to reach the pre-Inca Temple of the Sun and its cyclopean stones. The view alone is stunning. We'll gaze across the valley at the colossal face of Wiracochan, which marks the “place where the god descends”. Also a chance to see many examples of ancient machined stonework whose precision defies science. 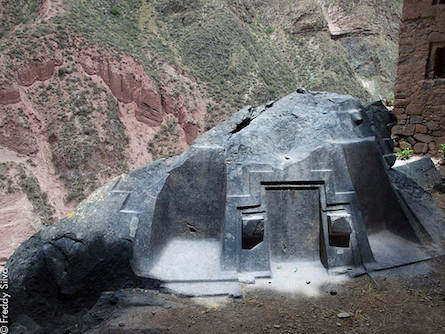 Sunrise trek through Machu Picchu to ascend the very steep sacred peak, Huayna Picchu. You can choose to scale the summit or descend 1200 ft and sit in quiet contemplation at the hidden Temple of the Moon, used by adepts in the final phase of initiation at Machu Picchu. Or you can do both, if you are really, really fit.

We then descend into Machu Picchu and eat a packed lunch as the tourists begin to thin out. With its megalithic astronomical observation points, the geology of the location also funnels Earth energies, hence why it has drawn people on vision quests for millennia.

In addition to visiting a lesser-known ritual compound, it is a perfect spot to sit, meditate, and become one with the spirit of place.
(Overnight in Aguas Calientes at Taypikala Boutique Machu Picchu or similar) 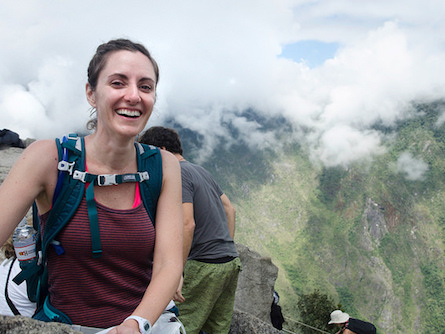 A day to chill. We earned it. And your calves will appreciate it, especially if you took advantage of the mineral spring pool near the hotel the night before. We take the 8.30am train to Ollianta, grab some food at the local market, and eat it in the main square of Chinchero. We also take a side trip to visit a local weaver's, and possibly meet Al and his brother Paca, time permitting.

We arrive late afternoon in Cusco for free time to relax and rejuvenate for the coming days. Stay at the hotel or take a gentle stroll through the colourful old town, taking in the craft markets and unique culture.
(Overnight in Cusco at the Hotel Ruinas or similar) 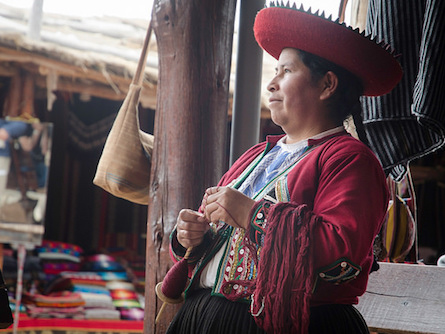 We fly to Juliaca and take a late lunch in the village of Sillustani, overlooking a primeval lake and its mesas. The rest of the afternoon is for hiking to the ritual area and its iconic circular towers, once used for secret resurrection rituals, the highest achievement for initiates in the old Mysteries schools. It's worth it just for the beautiful and serene location. 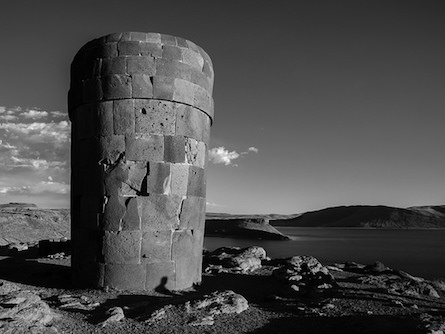 An action packed final day, beginning with a boat trip to the Uros Islands for a gentle morning in this unusual floating reed community. It's an opportunity to learn from the Uros about ancient practices and traditions, and to admire a simple yet vanishing way of life. According to legend, the Uros existed before the sun when the earth was cold and dark and, although they claim to have black blood, which makes them impervious to the cold, they are a warm people.

After lunch we travel to Molloco for meditation inside a chullpa, followed by a visit to Amaru Muru, a portal to the Otherworld carved out of an entire hillside, for our closing ceremony. We then return to Chucuito for a Farewell Dinner together, making the most of our final day in this sacred land.
(Overnight in Chucuito at the Taypikala Lago Hotel or similar) 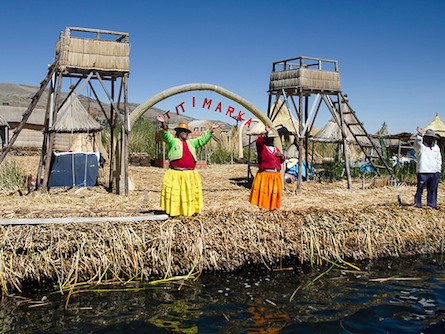 As you ready yourself to transfer to Juliaca for your flight home, take a moment to ponder over time well spent away in the world of the ancients. Having “drunk the knowledge” at each sacred site, your energy will have been raised, so that in all your interactions with everyday life you will come see the world around you in ways you'd never contemplated before.

(B = Breakfast; L = Lunch; D = Dinner)
Note: This itinerary is subject to change due to conditions beyond our control. 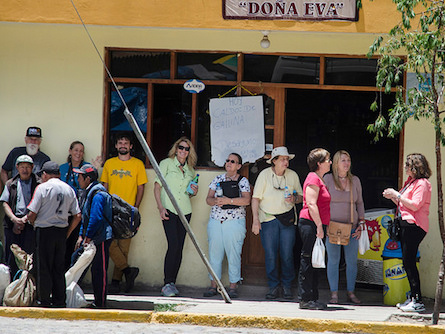 Welcome to Portals of Peru with Freddy Silva