Sacred Earth Journeys is leading the way in 2022 pilgrimages for the post COVID world. According to a recent article by National Geographic, “More travelers than ever are embarking on pilgrimages, a trend that may boom in a post-COVID world, as people move away from short-haul city breaks toward fewer flights and longer trips with a sense of purpose.”

Enter Phil Cousineau. Working with Phil for over a decade has imbued our mission as promoters of pilgrimage with insight and magic.

Our participants who decide to travel with Phil always come away with a deeper sense of themselves as wanderers, artists, and mythopoetic journeyers through life at large.

One writer, Victoria Coen, had this to say after traveling with us and Phil on a writer’s retreat in Greece:

“Phil is an exceptional leader, teacher, writer, storyteller. . .I enjoyed his immense knowledge of Greek history and his incredible way of conveying it in engaging storytelling format which made the learning more intellectually stimulating as well as emotionally captivating.”

Whether it be via fueling their artistic endeavors, sense of myth and storytelling, or lust for adventure, Phil certainly has a charming way of instilling creative movement in the minds of his pilgrims.

Who is Phil Cousineau?

Phil Cousineau is many things. That is, his work has spanned multiple areas ranging from mythology (he’s worked personally with the prolific Joseph Campbell), authorship, TV host, and, of course, traveler.

In a recent interview we conducted with Phil, he revealed a bit about the 3rd edition of his popular The Art of Pilgrimage. This book has become a sort of travel bible for many adventurers worldwide. Phil’s goal with the book, after all, is to reveal “the seeker’s guide to making pilgrimage sacred.”

Phil is certainly a pioneer of sacred travel. In his book, he relays some potent advice:

“The time has come to set out for sacred ground…that will stir our sense of wonder. It is down the path to the deeply real where time stops and we are seized by the mysteries. This is the journey that we cannot not take.

The old hermit along the side of the road whispers, Stranger, pass by that which you do not love.”

We have over the years placed a deep trust in Phil as a facilitator of sacred travel. Thus, we’re especially excited for 3 upcoming pilgrimages Phil will be leading with us in 2022.

This journey is a love child of cultural appreciation and sacred pilgrimage. It’s all about experiencing Italy, arguably the world’s most artistic culture.

Many venture on into Italy to experience its many myths, art, literature, fashion, and crafts. These are the things that make up la dolce vita, translated as “the sweet life”.

Both delightful and transformational, here are some exciting things to look out for in the itinerary.

Greece: In the Footsteps of Odysseus and Penelope with Mythologist Phil Cousineau

“Keep Ithaka always in your mind. Arriving there is what you are destined for.”

Have you ever read Homer’s Odyssey?

We (and Phil) believe it to be an epic tale worthy of deep pilgrimage into its many myths, characters, and themes.

Phil has crafted an entire journey in Greece dedicated to “A Homeric Journey into the Wonderland: Heroes and Heroines, Gods and Goddesses”.

On this journey, we travel across the “wine-dark sea” to the world immortalized by Homer in the Odyssey, with a special emphasis on recent scholarship, archaeology, and a spate of extraordinary new translations, which gives long-overdue attention to Penelope, Circe, and Calypso, Athena, Aphrodite, and Hera.

Here are some itinerary highlights to get excited about!

The writing retreat in Hydra is perhaps Phil’s most hands-on retreat with us. It is a week-long retreat on the island aimed at sparking mythopoetic creativity, helping our writers become inspired, write from their heart of hearts, and release their material into the world.

You will be encouraged to spend time developing your manuscript rather than critiquing others’ work, and there will be opportunities for one-on-one consultations with Phil, as well as inspiring excursions.

Here’s some components of the trip to look forward to.

These three offerings led by Phil Cousineau represent his and our ongoing dedication to the sacred art of pilgrimage. For the sake of both outward and inward pilgrimage, consider embarking on these journeys with a man who’s prolific in his art as well as kind, open, and intelligent toward his participants. 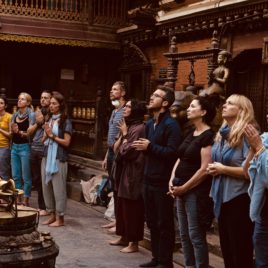 Previous National Geographic: "Pilgrimage is on the Rise" 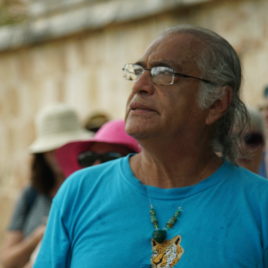