Father Bede Griffiths, previously known as Alan Richard Griffiths, has been called a scholar, Benedictine Monk, and somewhat of a theological genius. His genius, and thus his devotion, led him to support a transformation of religion he deemed absolutely essential. It was and is the transformation from an archaic, institutionalized spirituality to an embodied spirituality. To this end, he brought his Benedictine monastic practice to the East—to India, where he resolved to ignite the religious dialogue between the Sacred of East and West—of Hinduism (primarily) and Christianity. Bede Griffiths also sought a part of himself he had not found in monasteries of England: the Feminine.

In A Human Search, the book version of a Bede Griffiths documentary made about his life, Bede reflects on Christianity’s lack of the Feminine: “All the nations surrounding Israel, the Canaanites and others, were worshipping the Mother Goddess, which was the more ancient religion. Before the worship of the Father God, the Sky God, came in, the ancient people worshiped Mother Earth, Mother Nature, the Mother Goddess. We can trace the earliest (female) relics back to about 20,000-30,000 B.C.” Thus Father Bede set out to India to decipher the Feminine within.

Father Bede’s decision to plunge into spirituality is deeply rooted in his studies of the literary Romantic tradition. Therein, he discovered the poetry of the young John Keats, of Samual Coleridge, and of his favorite: the longing, divine reflections and verse of William Wordsworth. To Bede, Wordsworth “found God in nature…You can call this pantheism if you like, but really it’s the awareness of God in nature. And that remains with me, and remains with me today, as absolutely fundamental in my life.” So spake Bede during the interviews conducted with him for The Humann Search. He cites these lines from Wordsworth’s Tintern Abbey:

…For I have learned
To look on nature, not as in the hour
Of thoughtless youth; but hearing oftentimes,
The still, sad music of humanity,
Nor harsh nor grating, though of ample power
To chasten and subdue. And I have felt
A presence that disturbs me with the joy
Of elevated thoughts; a sense sublime
Of something far more deeply interfused
Whose dwelling is the light of setting sun,
And the round ocean and the living air,
And the blue sky, and in the mind of man:
a motion and a spirit, that impels
All thinking things, all objects of all thought,
And rolls through all things.

Bede pursued his scholarly efforts in literature and classics at Oxford University in England where he befriended and was tutored by renowned inkling C.S. Lewis.

Bede also grew rather close with Martyn Skinner, a fairly successful poet who wrote satiric epics and who lived with Bede in an “experiment in communal life” in the small village of Eastington. There, Bede began reading the Bible as part of his continued literary studies. Soon he started practicing prayer and reading the Bible in a more religious context.

After Eastington, Bede found himself increasingly craving solitary, communal living. He spoke with a priest who brought him to Prinknash Abbey in the Cotswolds. It was there that Bede Griffiths began his life as a Benedictine Monk. There, he prayed 7 times a day and sang Gregorian chants. He worked in the fields, shops, and garden with other brothers of the abbey, creating what he considered a “balanced life.” He had a particular interest in the library where he passed a lot of his time. Bede’s life at Prinknash went on for 25 years before he decided to journey to India.

Father Bede Griffiths is most notably renowned for living in and leading ashrams in India where he went to “discover the other half of [his] soul,” as he wrote to a friend. He had a profound impact on the “Christian Ashram Movement,” a significant movement in which monastic Christians began to embrace Vedanta and other teachings of the East. It was in India where Bede began to embrace the Feminine, something he felt Christianity lacked due to, as he relates, the fact that the nations surrounding Israel worshipped a Mother Goddess at the time the Old Testament was written. Bede describes an experience he had near a river while in India. He saw a lingam and yoni, representative of the male and female organs. “This scene reinforced for me the sacredness of sex. This sacred sense is deep in India, and so is the sense of the feminine, the Mother. We are always related to Mother Nature, to Mother Earth. And this is a beautiful experience.”

Eventually, Bede Griffiths took over stewardship of the Saccidananada Ashram (more commonly know as Shantivanam, “forest of peace”) in Tamil Nadu, South India. The ashram was founded by Jules Monchanin and Henri le Saux, two ardent proponents of the Hindu-Christian interfaith dialogue. These two, along with Bede became known as the “Trinity from Tannirpalli.”

Bede passed his days leading services and teaching biblical history and interpretation in an air of refreshing spirituality. Then, in 1990, Bede experienced what he considered one of his most awakening experiences yet: a stroke. “Psychologically, I think,” Bede reveals, “it was a breakthrough to the feminine. I was very masculine and patriarchal and had been developing the animus, the left brain, all this time. Now the right brain—the feminine, the phonic power, the earth power—came and hit me.” From his stroke, Bede also gained a deeper sense of nonduality, a way of being that goes beyond good and evil, light and darkness, black and white, and so on—basically, a deeper sense of unity.

Most importantly, perhaps, Bede came to interpret the Trinity in a new way, a way that is the key to the understanding of life. He began to equate the father with sunyata, a Buddhist concept of emptiness, void, and the abyss of being. Through sunyata comes forth the word—“the wisdom, the light, the sun,” Bede teaches. “It is a nondual relationship. The Son is not the Father, the Father is not the Son. They are not separate either…it is what is called a subsistent relationship. This is a key to life, because today we see the whole universe in terms of this interdependent relationship.”

And Bede spent his final days as thus, experiencing a deeper sense of nonduality, deepened, even, after another stroke. Sister Marie Louise of Ananda Ashram, who was interviewed for A Human Search, remarked that after the 1990 stroke, “there was no physical change in the man, but mystically, intellectually, spiritually, he has been embellished.”

With the sense of nonduality and unity of masculine/feminine Bede experienced throughout his life, he sparked a loving, accepting sense of understanding between Christianity and Eastern religions, most notably Hinduism, Buddhism, and Taoism. He eventually met the Dalai Lama who said this about Bede: “His vision has guided him to open the hearts and minds of mankind to gain understanding and acceptance of all the major religions…to gain a sense of peace and unity [and] goodwill.”

We will be embarking on a pilgrimage to Bede’s ashram, Shantivanam in Tamil Nadu, where we will stay for a couple of days as we connect with the soul of India. This will be on our journey with Andrew Harvey (who was close with Bede and helped create A Human Search) titled Shiva Dancing: Sacred South India With Andrew Harvey. 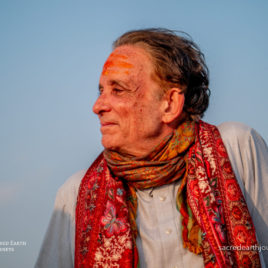 Previous COVID-19: Seeking Solace Through the Words of Andrew Harvey 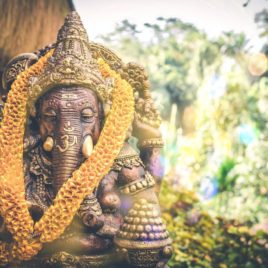 Next How to Connect With the Soul of India