“Each human – man or woman, white or black, western or eastern, rich or poor – is a child of one spirit, one energy, one god, one love.”

These words come from a man who has dedicated his life to preserving the sacred sites of the world so that we may all learn the secrets and lessons that these divine places have to share with us.

Martin Gray has lived a life that has transcended the path less taken. He has succeeded in the world of capitalism yet chosen to return to his roots of spirituality and enlightenment with a mission to share it with others. Martin’s childhood was spent traveling the world as his parents immersed him in archaeology, photography, classical music, and painting. This inspired Martin’s early interest in photography and he quickly ventured out on his own capturing the beauty of the world around him through his own innocent lens.

When he was twelve years old Martin’s family moved to India. He would frequently adventure out to explore this new and alluring land. For many of these journeys, Martin would be accompanied by wandering holy men and they would share their wisdom with him as they visited temples, mosques, and the sacred caves of Nepal and Kashmir.

Sacred Earth Journeys is offering a journey through North India in February 2020 to some of India’s most beautiful and holy sites. This journey will be led by Andrew Harvey a renowned author and the Founder Director of the Institute of Sacred Activism. When we plan these journeys we gather wisdom and inspiration from travelers all over the globe. Martin Gray was one of the many people who helped inspire this journey.

Our journey, Divine Love: Sacred North India with Andrew Harvey, will be a feast of artistic and spiritual beauty, dedicated to an exploration and celebration of divine love in all its forms. We will be visiting multiple sacred sites, ancient temples, tantalizing restaurants (including a cooking demonstration and dinner with a local family in Jaipur), as well as teachings and guided meditations with Andrew Harvey.

Just a few of the highlights of this journey include Old Delhi and New Delhi, especially the places that Andrew wandered in and adored as a child, such as the Red Fort, which awoke in him a passionate curiosity for the Mughal world. Next is Udaipur, the city of sunrise. This city is home to many exquisite temples and palaces such as the hill-top City Palace where we will explore the Sheesh Mahal, the palace of glass and mirrors and the “garden of maids”, Saheliyon Ki Bari. This fifteen-day journey will also include visits to the beautiful sites of Jaipur including Amber Fort, Jantar Mantar, and of course a visit to the iconic Taj Mahal in Agra.

To describe our visits to the next two holy cities, Varanasi (Banares) and Khajuraho, we leaned on the experience and knowledge of Martin Gray. While in Khajuraho we will be visiting both the eastern and western temples. Here are some insights from Martin about the significance of the different areas.

“The Khajuraho temples were built with precisely carved sandstone blocks, weighing as much as 20 tonnes, which were held in place by gravity, not with mortar. Oriented in an East-West direction, with their openings facing east, the temples have three main compartments: an entrance, a vestibule, and an inner sanctuary. In some of the larger temples, windows were used to bring light into the sanctuaries.

Both the exteriors and interiors of the temples are adorned with exquisite sculptures depicting various forms of the gods and goddesses, as well as the everyday life of people during the Chandela dynastic period in which the sculptures were made. There are sculptures showing farmers, potters, craftsman, musicians and women applying makeup, as well as elephants hauling large loads.

We will spend three full days visiting the holy city of Varanasi. It has many names such as Banaras, Avimukta, and Kashi. Varanasi is known as a pilgrimage site for people all over India because it is said that if you die in this city you go straight to heaven. Martin Gray explains:

“Banaras is the most visited pilgrimage destination in all of India. One of the seven Holy Cities, one of the twelve Jyotir Linga sites and also a Shakti Pitha site, it is the most favored place for Hindus to die and be cremated. Myths and hymns speak of the waters of the Ganges River as the fluid medium of Shiva’s divine essence and a bath in the river is believed to wash away all of one’s sins. The particular river-side location of Banaras is considered especially potent because, in less than six miles (ten kilometers), the Ganges is met by two other rivers, the Asi and the Varana.

Commenting of this specific location of Banaras along the river Ganges, the Hindu scripture Tristhalisetu explains that, “there whatever is sacrificed, chanted, given in charity, or suffered in penance, even in the smallest amount, yields endless fruit because of the power of that place. Whatever fruit is said to accrue from many thousands of lifetimes of asceticism, even more than that is obtainable from but three nights of fasting in this place.”

It’s insights like these that help us plan these incredible journeys. We appreciate spiritual explorers such as Martin Gray that share their inspiring stories, information, and photographs of these amazing sacred sites. We thank Martin for his beautiful photos which we’ve used in this blog. You can read more about Martin’s experiences on his website, Places Of Peace And Power.

To learn more about Divine Love: Sacred North India with Andrew Harvey visit our website to read more about the beautiful cities, temples, and spiritual sites that we will visit, as well as the personal invitation from Andrew Harvey. 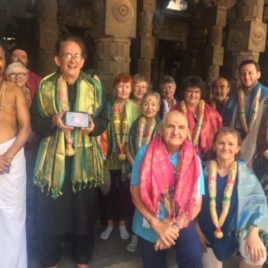 Previous Falling in Love with India 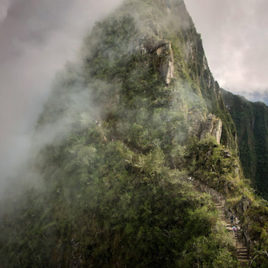 Next Temple of the Moon at Huayna Picchu – One of Peru’s best-kept secrets?