The Taj Mahal attracts millions of tourists and pilgrims every year. It is designated as a UNESCO World Heritage Site and is coined “the jewel of Muslim art in India and one of the universally admired masterpieces of the world’s heritage.” Other than its notable, vast architectural beauty, what makes the Taj Mahal one of the world’s sacred places worth visiting?

It has to do with love and sacred atmosphere. Andrew Harvey, who will be guiding us to the site during his “Divine Love: Sacred North India” tour, speaks well when calling the Taj a site dedicated to “both human and divine love.” Andrew challenges conventional notions surrounding the site’s construction while presenting the “Taj as a Sufi mystical monument representing nothing less, in its white splendor, than the Throne of God himself.”

Mystery and speculation are important components to the formulation of sacred places. They create the energy of wonder in an environment. Stonehenge and other Neolithic stones, for example, are subject to great speculation and mystery. Pilgrims visit these places to exercise their knowledge and imagination surrounding the sites’ use and construction. Surely, as many would agree, their purposes were intended for the sacred as thoroughly revealed through atmosphere.

Places worth pilgrimaging to have what we will call “divine potential,” or, the capacity to instill spiritual wonder and revelation in its visitors. The Taj has this divine potential. The mystical sites throughout Europe dedicated to Saint Michael have it, too.

Places dedicated to the divine always strike its viewers as beautiful, often insanely. These destinations don’t necessarily need to be created by human hands. The Ganges of India, for example, has served as a rich source of divine potential for millennia. The stretch of the Ganges River running through Varanasi happens to be another place Andrew Harvey will take us to during our sacred pilgrimage around Northern India.

Dedicating natural areas to the divine is not an uncommon phenomenon, and many of Earth’s sacred places include rivers, volcanoes, and natural landscapes. Mount Popocatepetl and Mount Iztaccihuatl of Mexico are sacred as is the essential life-giving force of Africa: The Nile River. Many of the pilgrims on the Road to Santiago de Compostela consider the land on the journey there to be sacred. Some pilgrims even report mystical experiences therein. For example, author Paulo Coehlo, in his book titled “The Pilgrimage,” receives insights from the surrounding nature during his hiking. He realized that “we always have a tendency to see those things that do not exist and to be blind to the great lessons that are right there before our eyes.”

People visit the sacred to be filled with the power of revelation. Revelation can come in the form of motivation, insights about one’s life, and a deep sense of clarity. Visiting natural lands and inspiring architecture alike present us with the necessary beauty to inspire a sense of urgency in one’s life. This is not a fear-based urgency, but one of love. This is an essential fact.

As for the natural places of peace and power—the mountains, the rivers, the landscapes, etc.—understanding how they became sacred in the first place lends us key wisdom into understanding their power over us.

The Himalayas are a good example of this power. In Asian culture, the Himalayan Mountains have been revered as sacred for a long time. Most of Asia’s major religions hold these mountains as holy and regard them as a great source of myth and folklore, inspiration, asceticism, as well as divine self-inquiry.

So how do the Himalayas inspire us today? Although when famous journalist Sara Jeannette Duncan tried to write about the Himalayas, she found that “when God gave men tongues, he never dreamed that they would want to talk about the Himalayas; there are consequently no words in the world to do it with”—we will still venture into this uncharted territory. This quote by Osho tells us a lot: “Sometimes it happens that you become one, in some rare moment. Watch the ocean, the tremendous wildness of it—and suddenly you forget your split, your schizophrenia; you relax. Or, moving in the Himalayas, seeing the virgin snow on the Himalayan peaks, suddenly a coolness surrounds you and you need not be false because there is no other human being to be false to. You fall together.” The history of the Himalayas—as with the history of other sacred sites around the world—is one of self-revelation through divine beauty.

History: Places Where Things Have Happened

Another element that creates a sacred atmosphere is the events that have occurred in said places over hundreds or even thousands of years. Cities, sites, and lands are all subject to visitation based on their history.

It goes without saying that the journey to India with Andrew Harvey will expose attendants to lands where much has happened. Love, conquest, divinity, revelation, transformation, and more have all molded India into the divine source of art, history, and religion it is today. People pilgrimage to India while acknowledging its transformational power derived from its potent history.

When visiting a place such as India, we should open ourselves to the possibility of transformation. Ages of spiritual study, poetry, and divine love render these lands a potent source of inspiration. But a sacred atmosphere is not necessarily enough to change us. The beholder needs to open their hearts to the potential of change within. Only then can a sacred atmosphere set the pace for the transformation we seek. 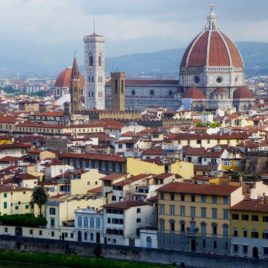 Previous The Power of Art and its Function for the Pilgrim

Next Going on a Pilgrimage to Redefine Travel