When you visit a sacred site, how can you figure out what makes it holy? This challenge is doubly difficult, of course, if the people who built the holy site lived hundreds of years ago.

On our Maya Temples of Transformation tour with Sacred Earth Journeys (see my previous posts on Palenque and Exploring Sacred Mayan Sites), we were fortunate to have Miguel Angel Vergara and Freddy Silva as our guides. I especially appreciated how Miguel–who is a living link to ancient Maya traditions–led ceremonies at each of the sites we visited. He helped us enter a very different spiritual world.

Of the three major Mayan sites we visited, Yaxchilan was the smallest, but in some ways it was my favorite. This was partly because of the Indiana-Jones-style in which we traveled to it: a 45-minute boat ride on the Usamacinta River on the border between Mexico and Guatemala. Along the way we passed mile after mile of dense rainforest, with occasional crocodiles sunning themselves on the river banks. At the end of our river trip, we hiked up a steep hill and then walked down a winding forest path until we finally arrived at the archeological site.

It was worth the effort.

Yaxchilan was the capital of a jungle kingdom that reached its height during the reigns of Lord Shield Jaguar and his son Bird Jaguar, two evocatively named Mayan leaders of the eighth century. More than 120 structures were built here, though only a small fraction have been excavated. Surrounded by forest, the site has a central plaza area flanked by a mixture of ruins and partially reconstructed buildings.

As we approached the entrance to Yaxchilan, Miguel gathered our group of 15 people into a circle and filled our cupped hands with a small amount of scented water. As we splashed the water over our heads, I recognized a classic rite of purification, a common feature of nearly all religions. Next Miguel gave us a few drops of an aromatic oil, which we used to anoint our foreheads–again, something I was familiar with in my own Christian tradition.

Miguel then directed us to put out our hands once again. “We will make an offering to the spirits of this place as we enter their home,” he said, going around the circle to pour a small mound of corn kernels into our hands “As you walk into Yaxchilan, you can honor them by the throwing the kernels along the path.”

Then we filed, one by one, into a shadowed passageway of stone, which wound around in the darkness for a number of yards before we climbed a small flight of steps. As we ascended, I could see the brilliant green of the jungle framed by a doorway ahead of us. The transition from darkness into light felt mythic and ancient.

At last we emerged into the full expanse of Yaxchilan. Though much smaller in size than Palenque, it nevertheless had a similar air of grandeur. With each step we took, the sounds of the forest became louder: the shrill caws and melodic twittering of birds and the rasp of insects. The greenery pressed close to the buildings, as if it was eager to overtake them once again.

After passing by several sets of low-lying ruins, we saw a temple on a hill above us, a landmark reached by a set of narrow, steep steps.

“Before we explore, let us gather together for a ceremony,” Miguel said.

We formed a circle around him, close to the base of the large temple, and watched as he took out the elements of the ritual–small wooden bowls that he filled with water, a drum, incense, pieces of brightly patterned cloth. He invited us to place our own sacred offerings in the center of the circle. People came forward with stones, crystals, and other symbolic items.

I looked around at my fellow travelers, most dressed in the white clothing that Miguel had suggested we wear that day. I could see how seriously people were taking this ritual, though for many of us it was likely a departure from our own traditions. I was struck, too, by the silence that had fallen upon us–a sure sign of the holy approaching.

And then–I kid you not–the howler monkeys began a chorus. From the treetops nearby they began to vocalize, a primal and wild sound unlike any I’d heard before. I don’t know about you, but I think a lot of church services would be greatly enhanced by the addition of some howler monkeys in the choir.

During the next half hour, Miguel led us in a ceremony that had echoes of shamanic ceremonies from around the world. He invoked the four directions and then the power of sky and earth. He led us in prayers and chanting, our songs accompanied by the rhythmic beat of the drum, which formed a hypnotic counterpoint to the sounds of the monkeys and the other forest creatures. He invited us to enter into the spirit of the place with our hearts, not just with our minds.

It was one of the most powerful ceremonies I’ve ever attended (and I’ve been part of a lot of rituals). It made me think, too, of the many holy sites I’ve been to where the sacred takes a back seat to tourism. It was a rare privilege to be led by Miguel into a deeper experience in this isolated forest oasis. His quiet wisdom helped us see that while Yaxchilan’s glory has faded, it is still a living spiritual site.

For the rest of the afternoon as I wandered amid the ruins of Yaxchilan, the ceremony led by Miguel framed my experience. It gave me a glimpse of why the Mayans created these remarkable landmarks of stone, here in this forest inhabited by creatures seen and unseen.

This blog was first published on www.patheos.com 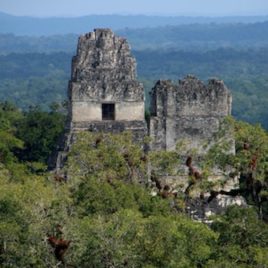 Previous The Splendor of Tikal 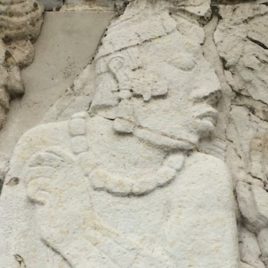 Next The Mayan Mysteries of Palenque